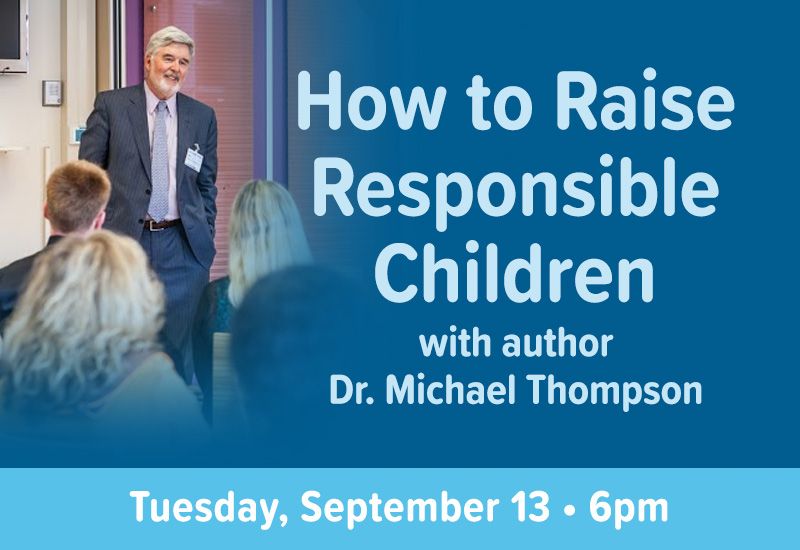 On Tuesday, September 13, Presbyterian Day School welcomes Dr. Michael Thompson back to campus. During the day, Dr. Thompson will work with PDS boys and faculty. At 6pm that evening, we will hold a special event for parents where Dr. Thompson will speak on "Raising Resilient Children."

You won't want to miss this session! Parents report being challenged, affirmed, and inspired after Dr. Thompson's previous visits to PDS.

Open to the Public • For All Parents

Early in life, every child needs a "secure base;" later a child needs a "framework" around him/her. Only when s/he feels securely anchored and contained will a child be able to follow rules consistently. How can a parent provide consistency and how can he or she successfully communicate with his or her child around issues of responsibility? What do we know about the different outcomes of democratic, authoritative and authoritarian parenting? Which method of parenting produces the most competent child?

In this talk, Dr. Thompson mixes anecdote and clinical experience with research on outcomes of different parenting styles. He shares a warm-hearted recipe for providing children with an internal foundation for moral behavior.

Michael G. Thompson, Ph.D. is a consultant, author and psychologist specializing in children and families. He is the supervising psychologist for the Belmont Hill School and has worked in more than seven hundred schools across the United States, as well as in international schools in Central America, Europe, Africa and Asia.

He and his co-author, Dan Kindlon, wrote the New York Times best-selling book, Raising Cain: Protecting the Emotional Life of Boys (Ballantine Books, 1999). He is the author of Speaking of Boys: Answers to the Most-Asked Questions about Raising Sons (Ballantine, 2000), and co-author (with Catherine O’Neill Grace and Larry Cohen, Ph.D.) of Best Friends/Worst Enemies: Understanding the Social Lives of Children (Ballantine, 2001) and Mom, They’re Teasing Me: Helping Your Child Solve Social Problems (Ballantine, 2002.) About Best Friends, Worst Enemies the Publishers Weekly review declared, “Not since Dr. Spock and Penelope Leach has there been such a sensitive and practical guide to raising healthy children.” The Pressured Child: Helping Your Child Achieve Success in School and in Life (with Teresa Barker, Ballantine, 2004) was written to help parents understand the complex journey of children through school, from Kindergarten through senior year. His third book on the psychology of boys, entitled, It’s a Boy!: Understanding Your Son’s Development from Birth to Eighteen, was published in 2008. It focuses on the importance of undirected, free play in the lives of boys. Dr. Thompson’s newest book, Homesick and Happy: How Time Away From Parents Can Help a Child Grow, was published by Ballantine Books in May of 2012.

A dedicated speaker and traveler, Michael Thompson has appeared on The Today Show, The Oprah Winfrey Show, ABC 20/20, CBS 60 Minutes, The Early Show and Good Morning America. He has been quoted in the New York Times, The Washington Post, Newsweek, Time and U.S. News and World Report and has been a guest on NPR’s “Morning Edition” with Susan Stamberg, “Talk of the Nation” with Ray Suarez and the Diane Rhem Show. He wrote, narrated and hosted a two-hour PBS documentary entitled “Raising Cain” that was broadcast nationally in 2006.

Dr. Thompson is a past member of the American Camping Association and is on the Advisory Board of Parent Magazine. Dr. Thompson lives in Arlington, Massachusetts. He is married to Dr. Theresa McNally, a psychotherapist, and is the father of two grown children and the grandfather of two granddaughters: Aubrey and Brynlee.