If he wasn’t concentrating so hard on navigating the intricacies of the “Warsaw Concerto” on the piano, Henry Yu could have had a semi-serious laugh watching his classmates’ reaction.

No less than five times, the PDS fourth-grader came to slight pauses in the piece. Each time, the audience started to clap, then had to quickly hit the brakes. Finally, and flawlessly, Yu completed the work and the room erupted.

Had this happened on the football field, PDS Elementary Division Head and Football Coach Mark Fruitt would have had conniptions about all the false starts. Here, it just made him grin wider.

Welcome to the Crusader Cafe: Amidst the chicken sandwiches, chips, classical and classic rock music, and cheers, classroom lessons are stashed when no one’s looking.

They all practice harder leading up to the Cafe, because they want to play well in front of their classmates and friends.

Fruitt started the Cafe three years ago. It’s outgrown the school cafeteria and found its way to the church Fellowship Hall. It’s also settled into a more comfortable three-times-a-school year format (October, January, and April). It’s open to students actively taking music lessons either at school or establishments like the nearby School of Rock, or who can pass an audition. Performers are slotted into the time their grade normally takes its lunch break to provide maximum peer support, though they will likely play before multiple grades.

Fruitt attributes the idea of starting the Crusader Cafe to journalist and author Malcolm Gladwell’s assertion that “to do something really well takes 10,000 hours of practice.”

“These boys spend most of their time by themselves honing these skills,” Fruitt added, “and most of the time they only get a couple of recitals to gain some notoriety. This exposes all the boys to what their classmates can do.”

Fruitt added that it reminds each student of the investment needed to master a skill in the classroom, on the field, or behind an instrument. “Practice isn’t the thing you do once you’re good,” he said. “Practice is the thing that makes you good.”

Will Watson leads the crowd in cheering for the lunchtime entertainment.

Yu, one of nearly 20 PDS boys who performed in October, said the Cafe “helps me control my nervousness and that helps me in other places where I go to play.”

The same benefit was gained by the day’s youngest player, first-grader Kellett Giles, who cruised through his rendition of Beethoven’s “Ode to Joy” despite the fact that before playing he had to go to the nurse’s office after poking his hand with a pencil.

“He toughed it out,” Fruitt told the boys after Giles stepped away from the piano.

Giles said simply, “I just had to get it washed off. I knew I’d play.” The smile on his face told anyone how he felt. 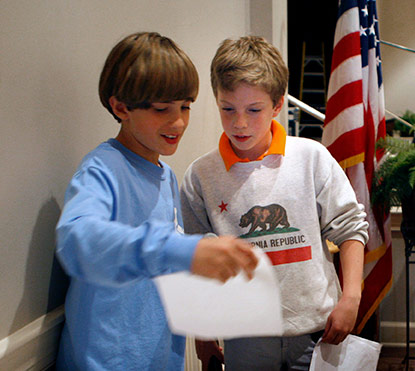 Cash Brown and John Monaghan discuss the setlist minutes before the show starts.

PDS music teacher Dawn Southerland said that playing for peers may be more enjoyable than a recital filled with parents, teachers and siblings. But she said the real benefit may be that, “They all practice harder leading up to the Cafe, because they want to play well in front of their classmates and friends.”

As the pianos, guitars, violins, and drums filled the lunch hour, two PDS students were scurrying around the stage — as they had been since 7:30 a.m. Sixth-grader Cash Brown is this year’s Cafe coordinator, with fifth-grader John Monaghan serving as his assistant.

“They solicit and screen the applications, work up the performance order and notes, set up the stage, and introduce the performers. They’ve taken ownership of this, and there’s little I have to do,” Fruitt said.

Both are strong drummers who are learning that craft at School of Rock. This day, Brown took time to get behind the skins and show his considerable chops.

School of Rock is where they have made friends with many of the performers who have been on the Cafe docket. But Monaghan said one of the neat parts of this job is “you work with kids your age all the way down to the youngest kids.”

Brown said that one of the biggest things he and Monaghan try to do is “make this as fun as possible so kids aren’t scared (to get up on stage).”

In the audience, Katie Monaghan watched her son John with no small dose of pride. “He really wants to get behind that mic and get out in front of people,” she said. “But this job has also shown him how to handle things like meetings and deadlines.” 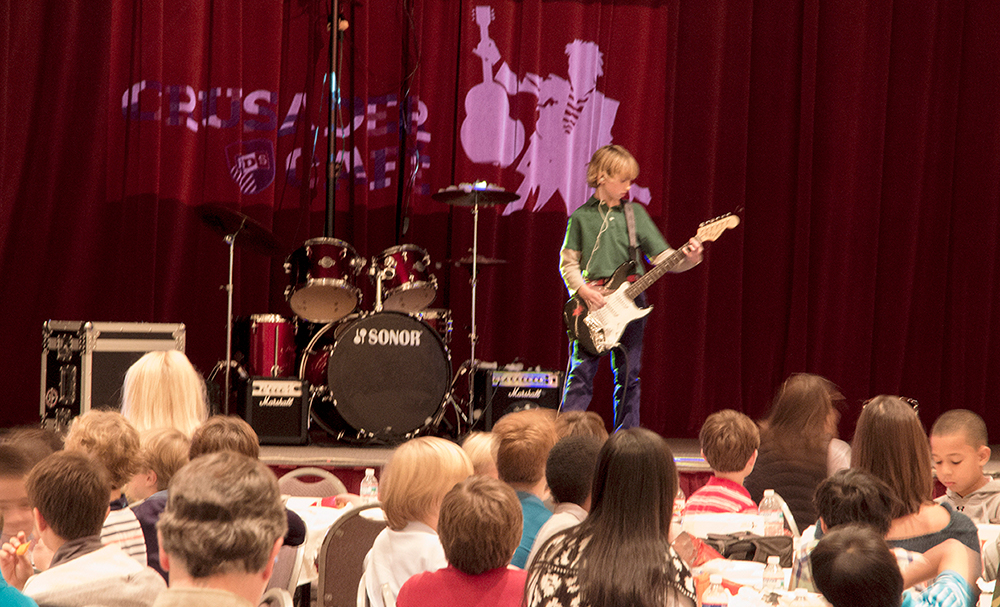 Brown’s dad, Kent, was not only a cheerleader, he was also responsible for getting Cash’s growing stash of stage equipment to the hall. In addition to three drum sets, Cash over the years has built a full set of stage lighting and a snow machine. “I hope to use even more stuff next time,” Cash said, grinning.

Kent Brown watched it all with a bit of a bemused smile. “Your son finds something he’s passionate about, and you support him,” Kent said. “Until recently we had been able to convince him that an electric drum kit (which can funnel the sound into headphones) was perfectly fine,” he added. “ But we’ve finally branched out. He’s bought most of his stuff with his own money.” Kent Brown had to wait for the takedown and take-home while Cash, John, and Dean of Students Ross Spain provided a mini “concert” for the senior kindergarten class, the last to arrive at the Cafe. They went into karaoke mode — the boys singing on-key and Coach Spain, well…

The kindergarten crowd jumped and danced at their seats in delight. “We let them burn off some of that energy,” Spain said, smiling. “However you can do that.”

As always, there was a bit of hidden truth sprinkled on top. Spain pointed to Brown and Monaghan and said “Watch them. They put all this together, and they treated each other with respect.” Then Spain looked at the group and said, “We had boys from nearly every grade up here performing today. We hope that the next time we have Crusader Cafe that some of you who take piano lessons, or guitar lessons, or violin lessons will get up here and show us what you can do.”

The lesson? A gift like music isn’t really a gift — until it’s given away.

Tags:
There are no up-coming events

2019 Advent Calendar Devotions for Your Family